Hi I'm getting some warnings in

Can someone help me? Best wishes weir

The first 2 warnings indicate that the file contains exons and CDS that were dropped because they couldn't be linked to a transcript. I just improved the warning message (the change is in GenomicFeatures 1.36.3) so it displays the number of exons or CDS that get dropped:

Note that the file contains some rare transcript types (scRNA, guide_RNA, telomerase_RNA, vault_RNA, Y_RNA -- these are valid Sequence Ontology terms) that makeTxDbFromGFF() didn't recognize as transcripts so this is why the exons and CDS linked to these transcripts were getting dropped. In GenomicFeatures 1.36.3 I added these types to the list of types that should be treated as transcripts so makeTxDbFromGFF() now drops a few less exons. As a consequence, the TxDb object I get contains a few (44) more transcripts and exons than the one you got with your version of GenomicFeatures:

The exons and CDS that still get dropped with GenomicFeatures 1.36.3 are linked to features of type C_gene_segment, D_gene_segment, J_gene_segment, and V_gene_segment. However these Sequence Ontology terms are not offsprings of the transcript term so I'm reluctant to add them to the list of types that makeTxDbFromGFF() should treat as transcripts. But if someone wants to make the case for adding these terms, I'm open to it.

Finally the 3rd warning should be self explanatory: in some rare occasions a GFF3 file can contain a few exons with more than one CDS. makeTxDbFromGFF() does not know how to import more than one CDS per exon at the moment so the warning just says that only the first CDS was kept for each such exon.

GenomicFeatures 1.36.3 should become available to Bioconductor 3.9 users in about 24-48 hours via BiocManager::install(). Note that you're using Bioconductor 3.8 which is not the current release and is no longer supported.

Hi, I also meet the same problems, and I checked the warnings, and as you mentioned above, I use the command grep -E "pre_miRNA" $HOME/datax/Genomes/IRGSP-1.0-release/gff/IRGSP-1.0.50.chrs.gff3 |grep -vE "ncRNA_gene" >items , and find all the warning items, it seems that was resulted from "ncRNA_gene" or "pre_miRNA". But I don't know how to deal with that. Could you give me some suggestions? 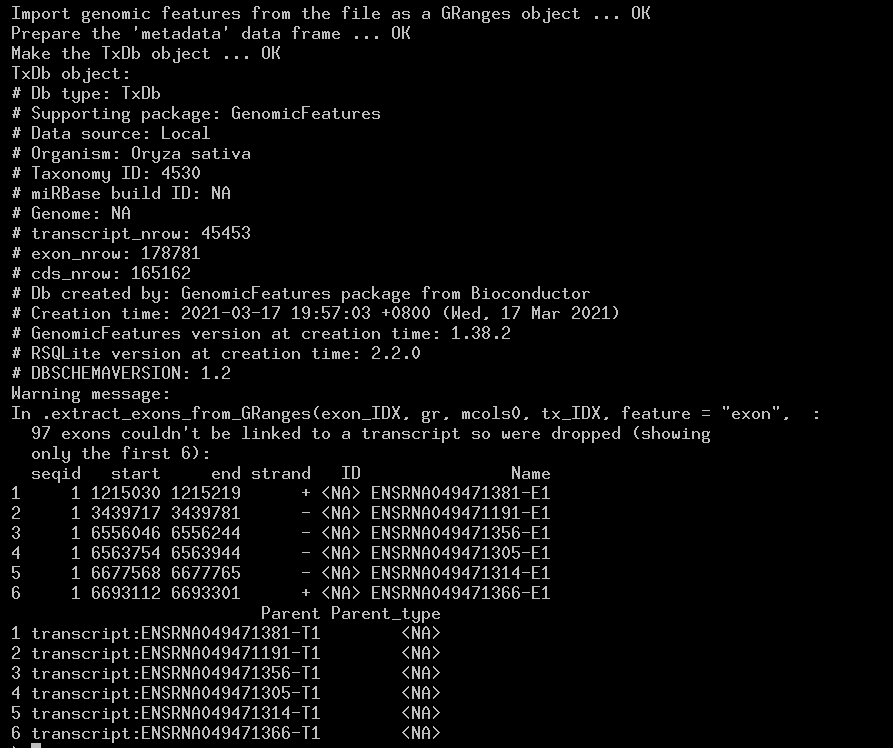 I added "pre_miRNA" to the end of ".TX_TYPES" exsisted in "makeTxDbFromGRanges.R", and then re-installed this packages. And it worked well with no warnings reported. 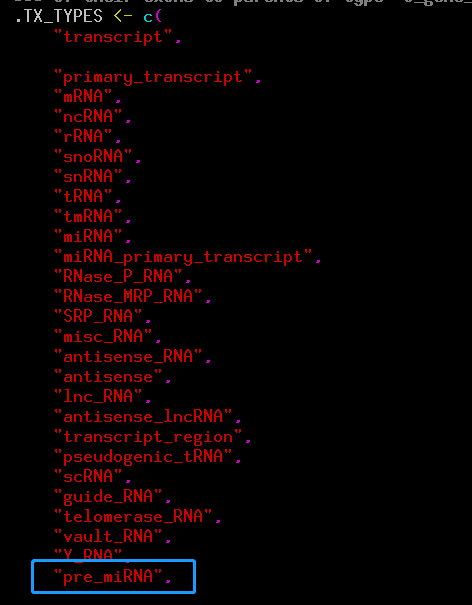 Unfortunately according to the Sequence Ontology, pre_miRNA is not an offspring of transcript via the _is_a_ relationship, only via the _part_of_ relationship, which means that features of type pre_miRNA are not considered transcripts. So I'm not sure that it was a good idea for the author of this GFF3 file to use the pre_miRNA term for the purpose of describing the exon/transcript structure of the associated genes. Maybe they should have used miRNA_primary_transcript instead?

Anyways, because pre_miRNA are not transcripts, I'm reluctant to add the term to the list of terms that makeTxDbFromGRanges() and makeTxDbFromGFF() should treat as transcripts.