I am studying the ATAC-seq data analysis pipeline recently. For the pre-alignment QC step, I used FastQC and trimmomatic tools. Then more than half of the reads were reserved and mapped to the reference genome using Bowtie2. After sequence alignment, duplicated reads, mitochondrial reads, non-unique alignments and improperly mapped reads were filterd. To evaluate the quality metrics of ATAC-seq data, fragement size distribution plots were generated using ATACseqQC.

Typically, there should be a large proportion of reads with less than 100 bp, which represents the nucleosome-free region. However, in my plots, the highest peaks is not in 50~100 bp but 200 bp, which corresponds to where Tn5 inserted around a single nucleosome. And I observed that in both two biological replicates, no matter filtering or not. And I wonder Why this happend? Is there any wrong in my data processing?

Figure 1. Fragment size distribution before filtering (There are many mitochondrial reads) 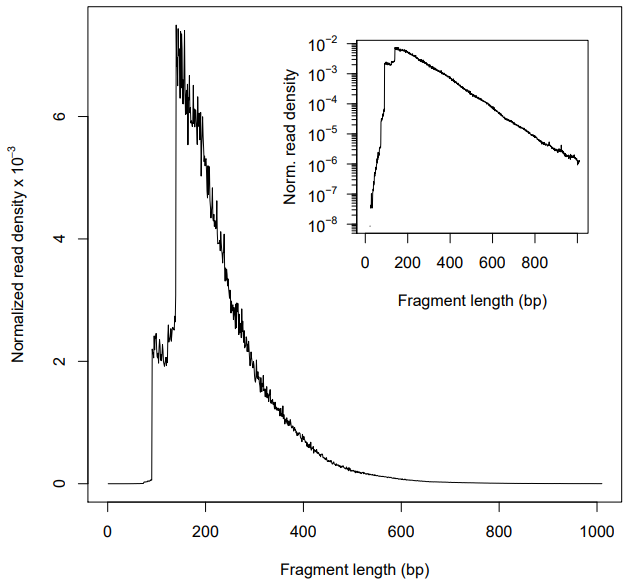 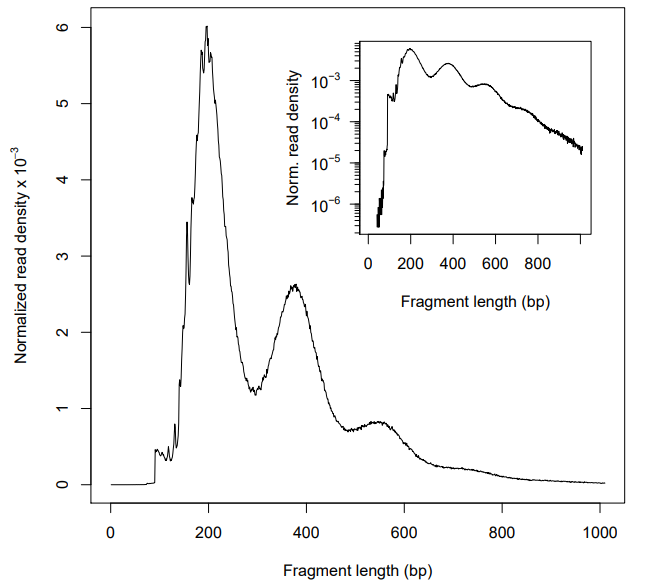 What is the read size of your experiment? What kind of alignment mode were you using? End to end or local alignment? Did you tried to switch the alignment mode? Looks like the fragment less than 100bp is missing from your bam file.

Thanks for your help. It worked when I switch the end-to-end mode to local. Before filtering step, indeed, the insert fragment distribution was start from ~100 bp (Figure 3). And the quality seemed good when I only removed the mitochondrial reads (Figure 4). However, as you can see in Figure 5, the first peak of ~100 bp disappeared again when I filtered multi-mapped reads (those with MAPQ < 30, using -q in SAMtools). Does it mean that most of the short fragment (~100 bp) are non-unique alignments? If so, how to explain it? Should I remain the non-unique alignments in my bam file? 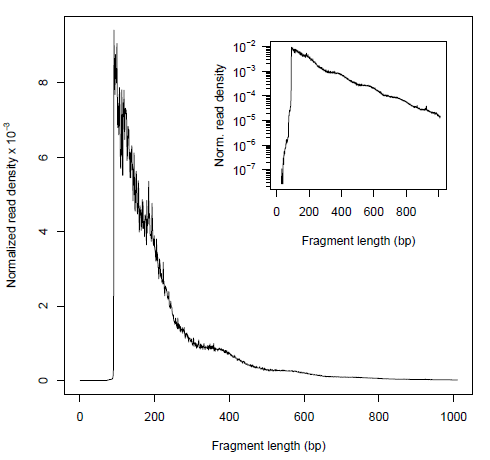 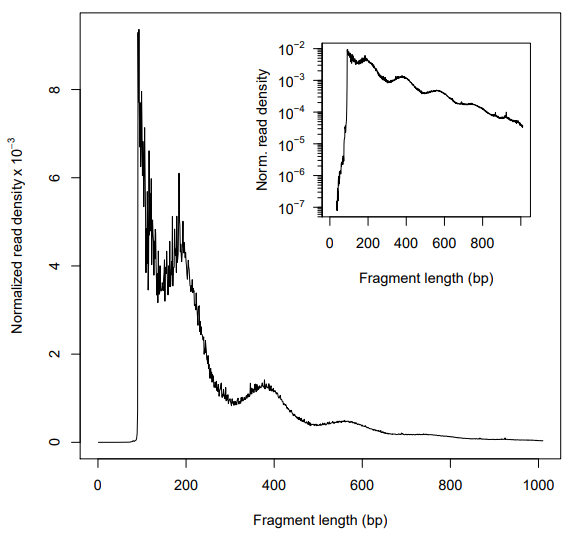 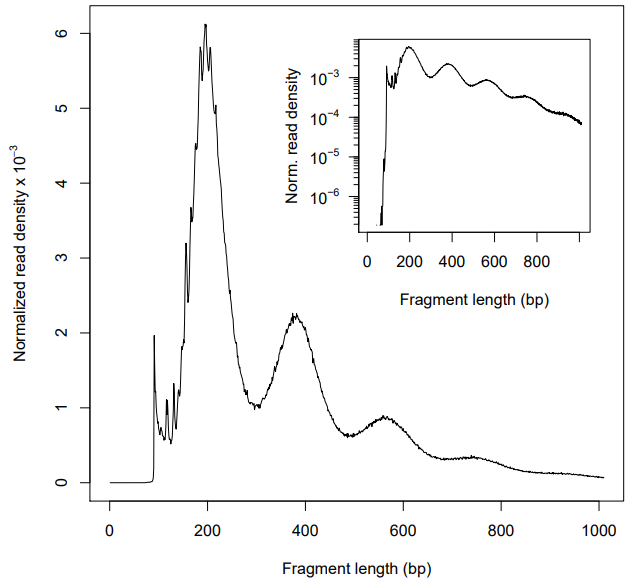 Try to trim the read length to 50 or 30bp before mapping and see what will happen.

Thanks for your answer. In fact the ATAC-seq data were download from the GEO database, so I have no information for the libraries. And the minimal length was set to 20 in the trimming step. My command is this:

Although the ratio of the size of _1U.fastq and _1P.fastq file may reach 20~30% , most of the reads were remained for mapping.

the option "HEADCROP:10" is poisonous, which remove 10 bases from the 5' of each reads. For ATAC-seq data, the 5' ends represent the Tn5 insert sites, should not be trimmed. For 3' end of reads derived from small inserts, it contain adapter sequences, which should be trimmed. Make sure your NexteraPE-PE.fa is correct, the sequences of adapters are specified correctly. you can check the Trimmomatic log file to see the trimming effect.

If you use end-to-end alignment by Bowtie, then reads containing partial of adaptor sequences after trimming will have a poor mapping quality or even discarded due to global alignment is impossible. Local alignment is preferred for ATAC-seq data. Personally, I used BWA-mem.

mapping quality >30 might be too stringent. You can plot a histogram to see the MAPping quality distribution. You can refer to our publication: https://www.ncbi.nlm.nih.gov/pmc/articles/PMC5831847/, especially Suppl. File 1, and Bioc2020 conference presentation: https://haibol2016.github.io/ATACseqQCWorkshop/articles/ATACseqQC_workshop.html.

Thanks for your advance. I cut the 10 bases from the 5' of reads, because their proportion of each base showed in FastQC report were bad. And the adapters from Nextera transposase sequences, which later removed using NexteraPE-PE.fa, were also found by FastQC. Now I trimmed the reads again, without "HEADCROP:10" and as Jianhong suggested, trimming the read length to 50 . But there were little change compared with the previous results.

Since you can get Figure 4, I think it will be fine to go ahead though you may not get accurate open chromatin regions. Especially, footprinting analysis might be not accurate.

Anyway, this is a data quality issue, not because of our package.

Thanks a lot. As you point out, this should be a data quality issue and might have resulted from biased size selection during library preparation, which also mentioned in ATACseqQC (https://bmcgenomics.biomedcentral.com/articles/10.1186/s12864-018-4559-3#Sec4). Especially, using the same pipeline, I processed another ATAC-seq data downloaded from ENCODE database. However, the problem above did not occur.