(Apologies, this got rather long ...)

I've encountered a situation where DropletUtils::emptyDrops() was calling 'too many' non-empty droplets and would appreciate some advice. Initially, I noticed this affecting 1/60 captures in a large scRNA-seq experiment I'm analysing. But upon investigating the issue further I'm wondering whether I should also revise how non-empty droplets are being identified in the other 59/60 captures (and more generally in other similar-ish experiments).

I found similarities to a previously reported issue ('emptyDrops behaviour when excluding mitochondrial/ribosomal genes') whereby the performance of emptyDrops(), and in particular the identification of the knee point in the barcode rank plot, was improved by excluding mitochondrial and ribosomal protein genes (this is now documented in the 'Non-empty droplets versus cells' section of the man page for emptyDrops()). In my case, the knee point is being properly identified, but there are still too many non-empty droplets. Another point of difference to the earlier report is that the genes driving the differences between the retained low-count barcodes and discarded barcodes in this capture are T-cell receptor (TCR) genes, which I suspect may suggest the need for assay-specific or sample-specific gene filtering.

Some details of my experiment:

Following the advice in OSCA Advanced 'Testing for empty droplets' and 'emptyDrops behaviour when excluding mitochondrial/ribosomal genes', I made:

In these plots, the top row is without gene filtering and the bottom row is after filtering out mitochondrial, ribosomal protein, TCR, and BCR genes. Nothing seems amiss in the barcode plots, with the knee being well-identified in all 5 captures. The same is true without and with gene-filtering.

In these plots, the top row is without gene-filtering and the bottom row is with gene-filtering. You can clearly see the P-value distribution is not uniform for C120_batch13_1 without gene-filtering but looks reasonable-ish for the other 4 captures. I was a little surprised that the P-value histograms are, if anything, 'worse' after gene filtering. However, given the non-empty droplet calls look more 'reasonable' after gene filtering, I'm leaning towards overlooking this anomaly(?), although it would be good to understand why this is and if I should be more concerned by it.

You can see in C120_batch13_1 that there's a lot of genes with large logFCs but that the TCR genes stand out. I'm a bit miffed why this has only affected 1/5 captures in this batch and I assume that this capture is likely to be more affected by ambient RNA which I'll need to keep any eye on in downstream analysis. 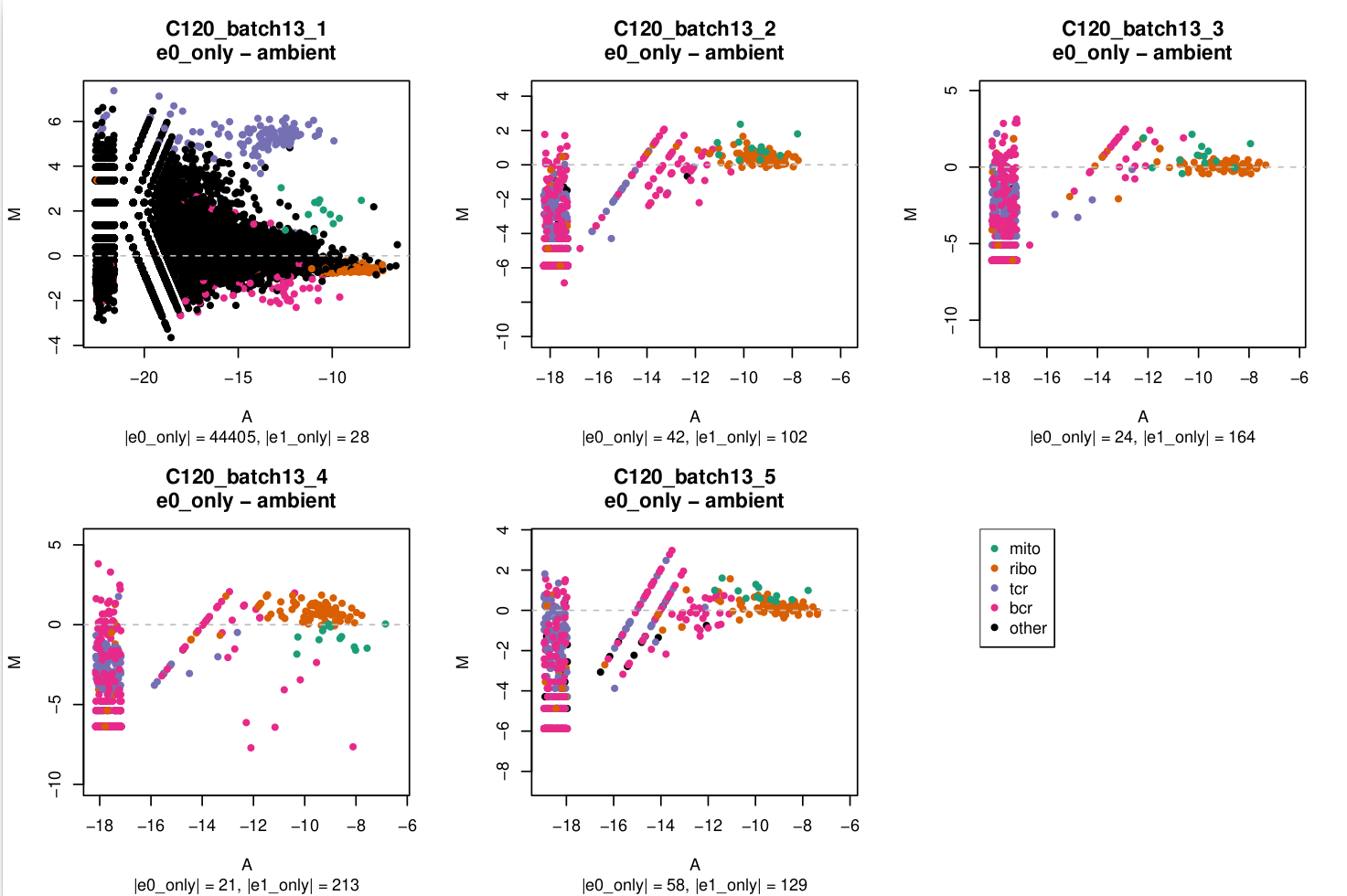 Extension to other captures in this experiment

I then decided to re-run emptyDrops() on each of the 60 captures both without and with gene filtering to see if any of the other batches might be affected (I had not previously looked very closely at the emptyDrops() diagnostics because I'd obtained seemingly sensible estimates of the number of non-empty droplets).

A few things stand out:

I've had some further and ongoing discussion with 10x tech support. I've copied the initial reply below and will add any useful updates.

In short, for GEX+VDJ libraries Cell Ranger does additional filtering of barcodes based on the VDJ data (i.e. it's more than just their implementation of the EmptyDrops algorithm applied to the GEX data). I'm still not sure I've quite got my head around it, however, because the information in https://support.10xgenomics.com/single-cell-vdj/software/pipelines/latest/using/multi#why seems mostly to be about refining non-empty droplet calls for T and B cells. How, then, does Cell Ranger (specifically cellranger multi​) estimate/identify non-empty droplets that don't contain T or B cells?

Anyway, as I pointed out in my reply, it would really help if the source code of Cell Ranger was easily browsable and publicly available, because AFAICT the source code is only available up to v3.0.2 (https://github.com/10XGenomics/cellranger).

From 10x Genomics' perspective DropletUtils is a 3rd party tool, therefore, your support for this tool is very limited. My understanding is that when you are running the emptyDrops() function, you are finding a larger than usual number of non-empty cells due to the presence of ambient RNA. The Cell Ranger pipeline for V(D)J libraries have filters in place that detect droplets with potentially ambient RNA, and these contigs and associated barcodes are filtered out. This is done is multiple steps throughout the heuristics of the algorithm (for example, filtering out contigs with low confidence, filtering out contigs that are not "productive" etc). Details about how the algorithm works on the V(D)J library can be found here: https://support.10xgenomics.com/single-cell-vdj/software/pipelines/latest/algorithms/overview.

An important thing to notice is that the cellranger vdj pipeline (integrated into the cellranger multi pipeline, if you have used that), does not have an implementation of EmptyDrops like cellranger count (for GEX library) does (https://support.10xgenomics.com/single-cell-gene-expression/software/pipelines/latest/algorithms/overview#cell_calling). Therefore, based on the information I have now, I would like to suggest that if you have V(D)J library processed with Cell Ranger, then you can most likely trust that data for downstream analysis. Unless you see gross over-calling of cells in the V(D)J data or multiple clonotypes that are only single chains or oddly chimeric, I would not start to doubt the Cell Ranger results.

Based on what I have written above, you may wonder that in case of cellranger multi pipeline, how would the pipeline escape the EmptyDrops stage. Details about the multi pipeline are available here: https://support.10xgenomics.com/single-cell-vdj/software/pipelines/latest/using/multi#why

Basically, the GEX data cell calling happens with EmptyDrops in the early stages, and then V(D)J data cell calling happens according to the cellranger vdj algorithm. Cells that are called only in the V(D)J library but not in the GEX library, are filtered out from the final results. This is done to ensure more accurate cell calling on the V(D)J part, that is, even if the cellranger vdj algorithm decides that a barcode is cellular and not background, if it is background from the GEX perspective, then it is filtered out, therefore, further reducing the chance of assigning a barcode as a cell when it is merely associated with ambient RNA.

I've encountered similar issues (i.e. inconsistency between CellRanger's implementation of emptyDrops() and DropletUtils::emptyDrops defaults) due to ambient profile differences. Also, I presume your batches are multiplexed (as you are using v2 chemistry?). I ask because I've often wondered if overloading the lanes can affect the ambient profile for samples (Although I am don't remember all the 10X Chromium specifications offhand)

Thank you, Imran, for your response. I hope to look more closely at those 'real barcode' and 'false positive barcodes' at some point and may explore the idea of a 'batch-wide' ambient pool, although I think these samples show the ambient pool can be capture-specific and vary within a batch.

Perhaps there is something wonky with the TCR sequences that exclude them from the barcodes with below 100 counts. Maybe TCR sequences are prone to aggregation and so, when you observe them in an empty droplet, they always come with high counts. You could check this with DropletUtils::emptyDropsCellRanger, which - among other things - uses CellRanger's definition of an ambient profile. IIRC the main difference is that it uses barcodes in a more restricted range of total counts - something like 45000-th to 90000-th barcodes with the largest totals - compared to my original emptyDrops implementation, which takes all barcodes with total counts below 100.

As for the p-value distributions; nothing obvious comes to mind. Maybe the ribosomal genes were having a "buffering" effect on minor violations of the null in other genes, assuming that the null was true for the ribosomal genes in most samples; their relatively large counts would mean that they dominate the p-value considerations when the total count is low and the evidence for rejection from other genes is near-zero. Having said that, the distributions after filtering are not a disaster zone of model misspecification (e.g., with spikes at zero and 1) so I'd just move on.

Interestingly, DropletUtils::emptyDropsCellRanger() gave ~20,000 non-empty droplets for the problematic capture, C120_batch13_1, with or without gene filtering. This was with n.expected.cells = 20000 but much the same was obtained with the default of n.expected.cells = 3000. I've summarised these results in a spreadsheet (although it may not stay online permanently).

I'm happy to move on with regards to the P-value histograms.