I am using voom to perform differential expression analysis in an RNA-Seq project comparing 8 WT mice to 7 KO mice. For each mouse i have ~4 brain tissues A, B, C, D and i am interested in the comparison between KO and WT within and across tissues.

There are two sequencing batches, two flow cells in each batch, and within one of these sequencing batches i have another batch associated with the day of RNA extraction. The number of samples from the same condition/batch/tissue varies between 1 and 4.

The exploratory analysis of the data shows that the tissue effect is very strong, the first principal component (PC) captures 40% of the variance and separates tissue A from tissues BCD ; the following PCs (PC2 to PC7) captures signal associated with the annotated batches and/or tissue. There is a lot of variation within tissue related to the batches and some outlier samples within tissue. Only PC9 shows (light) separation of KO vs WT.

Since i have an unbalanced paired design, i chose to use the random effect approach in voom, blocking on the mouse variable. I merged the status (KO or WT) and the tissue into a combined factor (status_tissue) therefore including 8 levels and created the following design matrix including the batch as a covariate.

I then ran voomWithQualityWeights with the code below, hoping it would help tackle the observed heterogeneity, and latter tested for the wanted contrasts using eBayes (robust = TRUE mode).

With voomWithQualityWeights and the current design, I obtain the following number of genes with adjusted p-value below 5%: all tissues: 69, tissue A: 8, tissue B: 15, tissue C: 123, tissue D: 83. 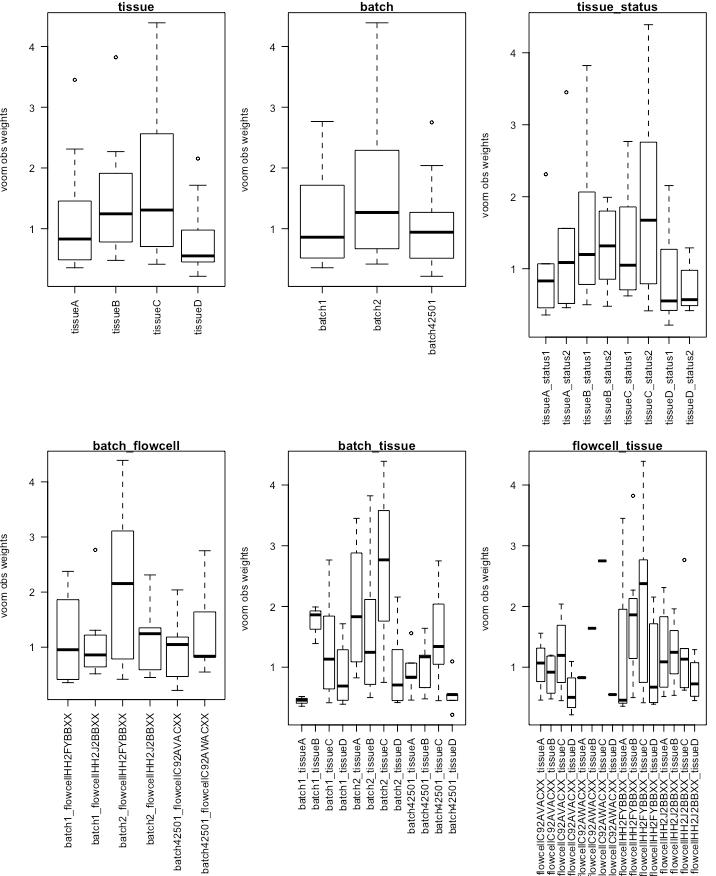 Your approach sounds reasonable to me.

I would typically do an MDS plot over the first few dimensions to see what variables are important in a given data set. If there is good separation between samples based on any of these (tissue, genotype (hopefully yes to both!), flow cell, day of collection (less interesting, but often important)), then I would definitely include them in the model provided there are sufficient degrees of freedom available for their estimation.

If there is further sample heterogeneity, then running voomWithQualityWeights using the design matrix you've arrived at can often help get you more differential expression, as you have observed here.