This is a crosspost from my old Biostars post - unfortunately no luck there yet.. I do consider this more of a theoretical question though, which is why I initially posted it on Biostars.

Hi! I have been battling with a multifaceted problem for months now and I can't figure out how to solve/clarify it, I would be extremely grateful for any comments/suggestions/opinions/criticism. In short, I can't figure out if I should use all my data or half my data in DESeq2 for calculating the size factors and estimating dispersion etc. i.e. when are the samples 'too different' and including both of them would unfavourably skew these estimations when fitting the model and result in a bunch of TPs and FPs?

The closest I have found to something similar in the vignette is http://bioconductor.org/packages/release/bioc/vignettes/DESeq2/inst/doc/DESeq2.html#if-i-have-multiple-groups-should-i-run-all-together-or-split-into-pairs-of-groups. And some discussions on biostars too, but none quite explaining to the level that would put me at ease.

Problems: As these cells come from different individuals there is biological variation between them, which is of interest. However, mutually 'changing' genes are of interest as well. There are multiple genes that are only expressed in clone1 or in clone2, which DESeq2 won't include in normalization, but could be important for a clone-specific sample normalization and other estimates (I would think?). To try my best and visually aid what I am taking about:

Side-note, would having an intercept 0 be more appropriate for the pairwise comparisons? design(dds) <- formula(~ 0 + clone_condition) 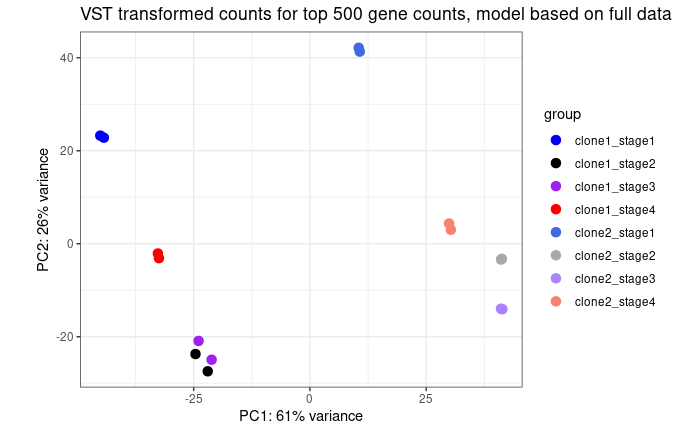 It is quite clear the PC1 explains the differences between the clones themselves and PC2 explains the difference between stages, but the first 2 goals are looking at intra-clonal effects anyway, so I won't be directly comparing these clones with each other at this stage (e.g. I might ask what is DE between Stage2 and Stage3 in Clone1, irrelevant of clone2). That said, is it then appropriate to even allow DESeq2 to gather information across both clones if I am looking at intraclonal pairwise comparisons? Or would it be more appropriate to model the clones separately for goals 1-2 and together for goal 3?

Sure, some of this is the effect of independent filtering and multiple-testing correction, I won't know if these are TP or FP, but manually checking some it seemed e.g. that genes with 0-counts in clone2, but showing expression (as well as 'expected dynamics' in expression differences) in clone1, were non-significant when ran together, but significant in clone1 when ran separately (not shown here). Indeed, I am not talking of huge LFC's (and not trying to massage relevant p-values), but those genes were biologically interesting (for that clone) and potentially something to look into further down the line through separate means, which might otherwise be missed with a general p-value filter and I don't think it is feasible to go through all of these manually....but does make me question what else could I be missing by having a non-ideal approach with analysis setup.

I don't know enough to think of any useful plots or metrics to help me decide, I did plot the dispersion plots, but I am not sure if I am overestimating the dispersion when running them together resulting in less TPs? 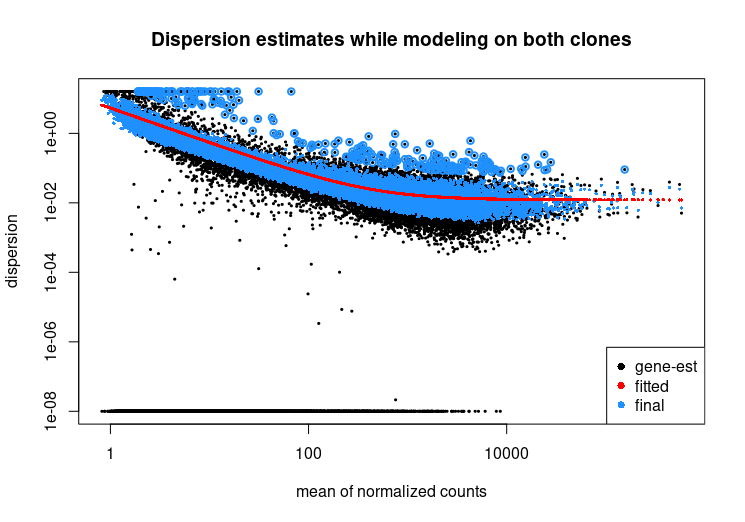 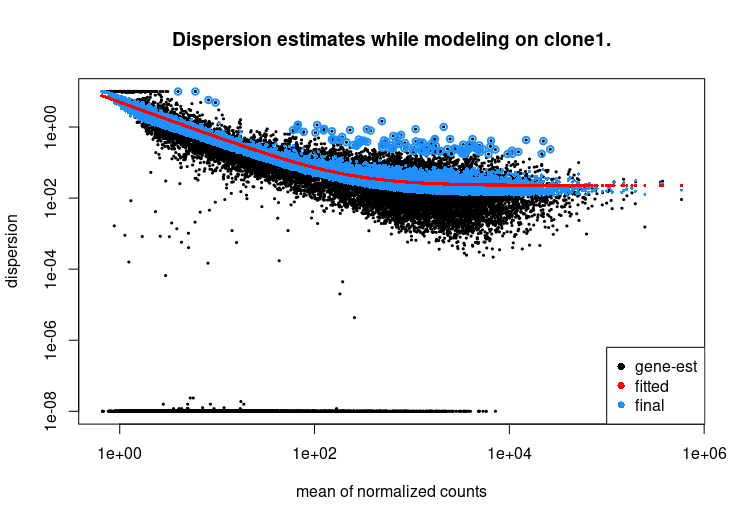 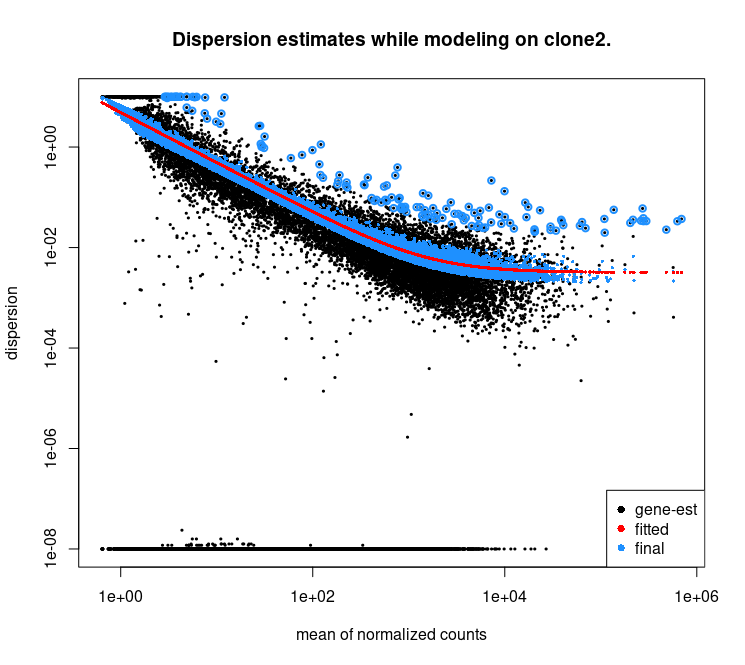 As it has been a while now I can say that I carried on modeling them separately (based entirely on my underdeveloped intuition), I also say this in the comments on Biostars, but I do still have restless nights with this haunting me. And I get the sense from my Biostar post that I might not be the only one. Please help.

The final decision is up to you, and I don't think there is necessarily a "right" answer, as it depends on assumptions.

But from your above, I think you can justify analyzing the clones separately for goals 1 and 2. The asymptotic dispersion is very different for the two clones (clone 2 having lower over-dispersion), so then putting them together will find a middle value for the dispersion for each clone, which will increase power for one experiment and decrease it for the other (in rough terms).

Thank you so much for your reply and clarifying!

This is excellent news, now I have some confidence that I did not mess up right in the beginning of my analysis!

Can I also ask a few follow up questions, because I think I still lack the proper insight, but I do want to grasp these concepts (at least to some comfortable level):

b) And that would also mean that a gene's expression does not differ a lot in the same group of samples? (and in general we don't expect most genes to change much in their expression in the same sample group and this is easier to assess when the mean is high, the right side of the plot)?

c) The black dots are shrunk towards this fitted red line for the final dispersion estimate - these would be the blue dots. How does the 'area' of blue dots relate to good or bad (or preferred vs non-preferred)? Does a large area/spread of blue dots mean that the final estimates are still kind of spread out and it would be better if I had a thin-close-to-the-red-line final estimates for the genes? (It probably is not this simple and has multiple caveats of over/under-estimating a gene's dispersion by shrinking it)

d) am I just over-thinking this?

a) No I wouldn't say you want the curve to look any particular way. Not sure I have any insight here toward this question.

Great! Thanks again for taking the time to reply - it has been very helpful.

I have same problem. i have 3 sample , one with WT and 2 others are treatment1 and treatment2. It is confusing for me when I try either approach and e.g. multiple group comparison for WT vs treatment1 contrast i am getting deseq2 result diiferent ,

Can anyone explain why and which approach is right i.e. DESeq 1 vs 1 comparison or multiple group comparison?

"It is confusing for me when I try either approach and e.g. multiple group comparison for WT vs treatment1 contrast i am getting deseq2 result diiferent"

Have you read the vignette section referenced in this thread?

See the original post above which links to the DESeq2 FAQ. It explains why results would differ based on the amount of data provided.

"Can anyone explain why and which approach is right"

Again, quoting myself from above:

The final decision is up to you, and I don't think there is necessarily a "right" answer, as it depends on assumptions.