I found that (not sure, i saw it somewhere)

Which logFC is better to trust?

Below is a figure of the comparison of different logFCs 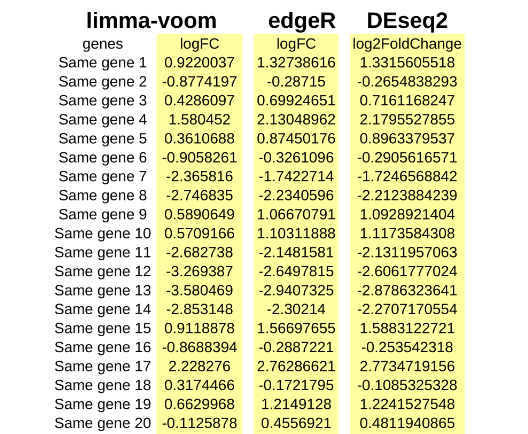 I'am doing RNA-seq analysis using Read Counts data of 3 replicates of 2 different samples. Iam using DESeq2 and edgeR for analysis. will you please help me to get mean(Group1) and mean(Group2)..?
in DESeq2 and edgeR output one can get logFC value directly but i want to include mean values of both groups in output table.

I simply googled “DESeq2 mean of each group” and got this post I wrote previously:

DESeq2 baseMean values for each sample

Thank you for your reply.. :)
I also got it from here which i actually wanted.

There are a number of reasons why the different packages will give different fold change estimates. It's pretty clear what the culprit is in your case, but I'll list all the possible reasons before I explain that:

The most important factors, the ones that can potentially give big differences, are (1) and (3). In your case it appears that the culprit is (1). Your log fold changes from limma are not shrunk (closer to zero) compared to edgeR and DESeq2, but rather are substantially shifted (more negative, with smaller positive values and larger negative values). Such a shift in the logFCs can only occur because you have normalized differently or fitted a different model in limma compared to the other two packages.

In summary, the differences you see are not intrinsic to the packages but have almost certainly resulted from the way that you used the packages.

People often make the mistake of posting on this support site results that they got from different packages and asking why the numbers are different. This overlooks the fact that the packages are not canned analyses but rather flexible pipelines with lots of options. So it isn't meaningful to give results from a package without explaining the details of how the package was used. So you have to give all the steps and options chosen (e.g., by posting detailed code) leading up to the results that are presented.

Your question boils down to whether the arithmetic or geometric means (of expression within each group) are better for computing log-fold changes. I dare say that this doesn't really have a clear answer - both means are valid measures of location, and the choice generally depends on what is mathematically convenient for your particular model. limma operates on the log-expression values, so it makes sense to set up the null hypothesis on the mean log-value (i.e., the log-geometric mean). edgeR and DESeq2 operate on the raw counts, so it is more convenient to set up the null hypothesis on the mean count (i.e., the arithmetic mean).

In general, I would not be particularly worried about the discrepancies between the two definitions. These should only occur when the variances are large and different between groups (a second-order Taylor approximation shows that the difference between E(log(x)) and log(E(x)) is a term dependent on the variance). If the differences between groups are strong enough to overcome the large variances, the discrepancy should be minor compared to the magnitude of the log-FCs and should not change your conclusions. If your DE is weak, then the affected gene wouldn't show up as significant in the first place, and so discrepancies can be ignored.

I guess that, with very large sample sizes, you can get significant hits for small log-fold changes that change in sign depending on whether you use one log-FC definition or the other. In such cases, you'll just have to keep in mind that each model is doing exactly what it's told; it's entirely possible for the arithmetic mean to increase in one group compared to another, while the geometric mean decreases. I suspect that this would require violation of the distributional assumptions, though, or at least some pathological scenarios.

That is all true, but there has to be something else going on with the data here. The limma logFCs are all down-shifted compared to the edgeR and DESeq2 results. This surely has to arise from a normalization issue.