I am analysing the dataset with two independent factors - genotype (WT, MUT) and age (pup, adult). I have 4 samples for each condition.

What I want to check is how being the MUTANT affects gene expression across the age and if the impact of mutation is age dependent.

What I need is to build a model that shows me:

However after reading on forums I am confused and I am not sure which approach is best. Also I am not sure if I should use LRT and in which step.

My first idea is the model with interaction, as a 'baseline' I set Wild Type adult:

Or is it better to use 'group' design? What is more informative in my case?

In the group design how do I interpret the last contrast - is it the same as interaction from the previous model? I will be grateful for any advice, this is the first time I am trying multifactorial analysis in DESeq2.

I have a problem with results interpretation. It looks like my main effect is somehow not consistent with the contrast and I am confused. I set the reference level as WT PUP

All seems to be correct...

What I obtained however is log2FoldChanges of opposite sign to what I see with plots (plotCounts) - genes that are upregulated in WT Adult according to my res1 have in fact higher expression in pups. I double checked the counts and it is clearly opposite to my results.

What am I doing wrong here?

You should set the levels before running DESeq()

I did but maybe there is an error somewhere in my script, please see below:

The log2FoldChange i.e. for this gene Tdg is according to my results - 0.9 while the counts are as below: 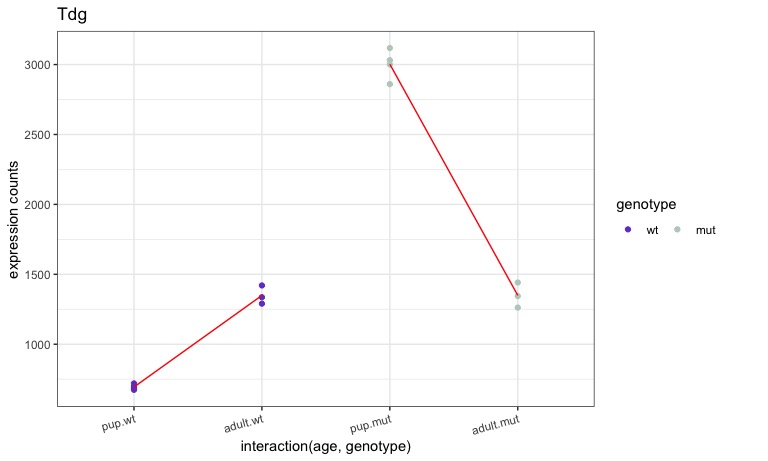 Hi Kevin, yes, I know I can do that but I am confused with why this result is opposite and I want to understand what went wrong. Since I am taking the contrast (age, adult, pup) I expect to see genes that are differentially regulated in WT Adult according to WT pup so I don't understand why I am getting the opposite result.

This is very disturbing for me and I am worried that the Interaction may also be wrong however I am not able to check it.

Is my understanding of "adult vs pup" correct? Or is it just a misunderstanding and this contrast is in fact genes in pup differently expressed according to adult? I am very confused with these results.

Following the logic, what you are deriving with this contrast is the 'age effect for wt', and the order of comparison is adult / pup. What was the accompanying p-value and what happens after you additionally run lfcShrink()?

Can you clarify which counts you are plotting (normalised or raw)?; Can you also plot the variance-stabilised expression levels?

In your code, should it not be:

...or, perhaps, this makes no difference

I think this must have a been a kind of bug - I restarted R and my computer and everything is ok (the sign now reflects the counts [ 0.9 instead of -0.9]). I don't know why this error occurred - maybe this is a problem with workspace refreshing in R (?)

Sorry for that and thank you for time and help, I really appreciate it.

Yes, my plot was based on normalized counts, I restarted now and everything is fine - probably the workspace was not refreshed properly.

Great - it is a good idea, in my opinion, to start a new session for every new analysis.

If you enter the contrasts manually it doesn't matter what you set as the reference level. Just do results(dds, contrast=c("age","pup","adult"))

I am confused with the contrast - I thought the contrast (age, adult, pup) would give me the log2FoldChange of the genes disregulated in adult with pup as a reference, is this correct?

My problem is not that I need this contrast, I noticed it is wrong so I am worried if other comparisons and mainly the Interaction are correct. I am confused with the fact that contrast adult vs pup is giving me result for pup vs adult (if I understand the order of factors in contrast correctly).

Hey, these are somewhat vague in their definition: "how age affects the counts", "how genotype affects the counts". To attempt to answer what [I believe] you want here, I would consider to just run an independent model of the form ~ age + genotype (or even just ~ age and ~ genotype separately) and then check the coefficient for each.

From your interaction design, ~ genotype + age + genotype:age, the interaction term, age:genotype, can be checked via a coefficient named "agepup.genotypemut".

There is useful information accessible via ?DESeq2::results() (at the bottom) about 2 x 2 interaction designs. I will paste here:

So, you can gauge age and genotype affects via the interaction design, but always with respect to each other, for example:

You can possibly check for general age and genotype effects via ANOVA / LRT with the interaction design, but one needs to be very careful about the interpretation. It may be better to consult with a local statistician.

Thank you, Kevin! I will try with the method described in Example 2 and extract the effects from results.

That contrast doesn't make a lot of sense, you wouldn't do that.

Imagine taking the results from here:

And for each gene, subtracting the fold change of one from the other, to find the genes where the fold change caused by the mutation is different in pups as opposed to adult. You'd then get a difference of fold changes, but no p-value.

If you do the design with interactions, and this contrast

you will get what I described with p-values. That's why you would do interactions.

I also have a question regarding interpretation of the interactions - how do I interpret the fold change in this case? If I understand correctly, this is not technically a contrast so I probably should only rely on p-values and not fold changes in this case, is my thinking correct?

Even though the column header will say fold changes, it will really be the difference between the fold changes as I described above.